We enable children to creatively raise awareness on child trafficking in their communities and spread their stories nationwide through film and social media.
Human trafficking is a crime and especially despicable when it affects the most vulnerable among us. Uganda is a hot spot for child trafficking, meaning that children are at high risk of being trafficked into child labor, sexual exploitation or child marriage. The End Child Trafficking Campaign Uganda aims at raising awareness on child trafficking and implementing the goals of SDG 16. Our target group are the ones who are directly affected. By educating children about the perils of trafficking and providing them a space to express their experiences creatively, they themselves become active agents educating the communities they live in. Children confront parents, teachers, and politicians on a personal level, urging them to become active in the fight against trafficking. Started in 2016 and implemented by volunteers from the creative fields and government institutions, the Campaign has traveled Uganda from the trading centers in border regions, to the cities up to the smallest village schools. 800 schools and 85000 children participated so far. Where ever the Campaign stopped, children were encouraged to act, sing and dance about their thoughts on child trafficking. Crowds of people gathered to see their performances or engaged in community dialogues. For once, children were not supposed to listen to adults - the common way of parenting in Uganda - but voiced their own ideas, teaching adults vital lessons. This unique participatory approach resulted in children speaking up about trafficking they had witnessed in their communities and actually saving children from exploitation. Many adults realized that wide spread customs such as child labor actually are child trafficking. Therefore, the performances enabled a trans-generational exchange on child trafficking that had a great impact on affected communities and transformed the perception of child trafficking towards a clearer picture of how to detect and stop it. 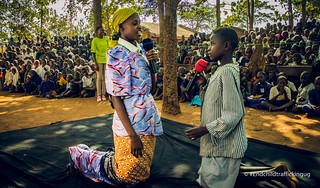 The Campaign kicked off in 2016 with the support of 3 Ugandan organizations, including FourSum Uganda, an artistic and cultural registered social enterprise. Founded in 2014, we have been engaged in many campaigns ever since, especially in the Campaign. Our work focuses on the use of creative arts to draw attention to social injustice in Uganda. Also, the Campaign is run by 2 lead partners, Wristhouse (Film) and PAPA ODET Foundation (Community development). In addition, the team behind the Campaign has grown into a global network of volunteers who support the Campaign both on ground and online.
MAP
Project CategoryCampaigner
Realated SDGs
16 Peace, Justice & Strong Institutions
https://www.facebook.com/EndChildTraffickingUG/?ref=bookmarks https://twitter.com/traffickingug https://www.youtube.com/channel/UCi1kPTBWzyaAZtMEdXWtYwQ Other
Edit Partner Information